The Persistence of Memory: A return to “Atypical symptoms with a critical lesion.”

In 2010, as part of a case series exploring the presentation of AV block in the setting of inferior wall STEMI, I discussed the following EKGs: 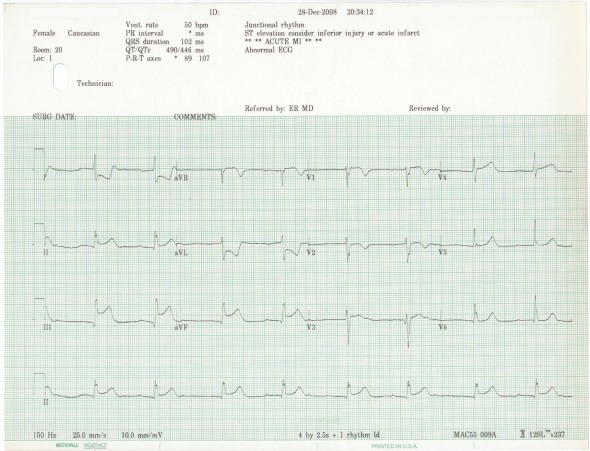 It was hypothesized from these tracings that a proximal RCA lesion was responsible for the manifest inferior wall and right ventricular involvement, likely in the setting of a right dominant coronary system owing to the AV nodal dysfunction.

Recently I was able to follow up on this case.

This was a 64 year-old Caucasian female complaining of nausea, vomiting, and a syncopal episode while attempting to ambulate. Her history was significant for HTN, hyperlipidemia, breast cancer, and a mechanical aortic valve replacement in 2005. At that time a presurgical cath had identified a 70% ostial RCA stenosis. This baseline EKG was recorded on admission: 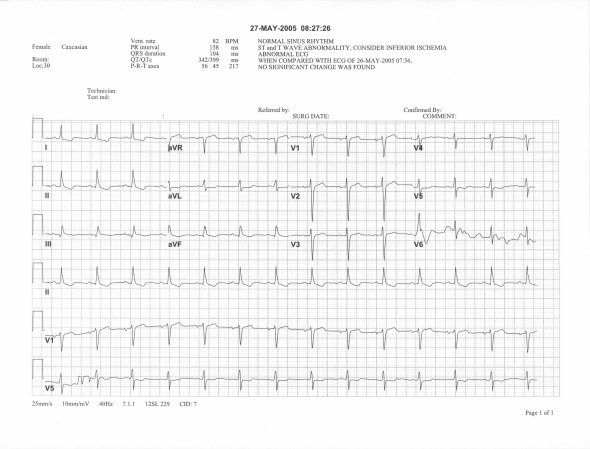 In 2008, on the date the case study EKGs were recorded, she became progressively hypotensive while in the emergency department and required intubation and vasopressor circulatory support. During emergent catheterization stents were placed across a 99% diffuse ostial RCA lesion and a further stenosis of the distal RCA. The interventionalist described a right dominant coronary system with a small LAD and circumflex. On arrival in the ED, a troponin of 0.14ng/mL was recorded. At noon on the following day the value had climbed to 55.20 and peaked at over 90 later that evening. 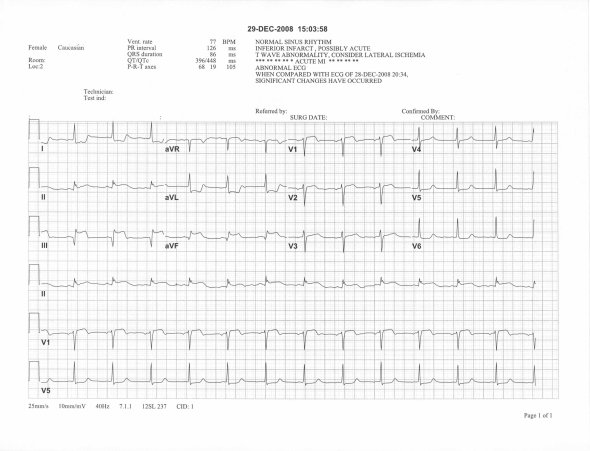 Due to cardiogenic shock, both an IABP and temporary pacemaker were placed. A long ICU course ensued during which numerous abnormalities were identified and addressed including but not limited to severe sepsis, a ruptured breast implant, gall bladder disease, elevated LFTs, and a renal mass suspicious for carcinoma. The following EKGs were recorded on ICU days 2, 3, and 4.

In June of 2009 she was again admitted to the hospital, at this time with a primary diagnosis of aspirational pneumonia complicated by renal insufficiency.

A tracheotomy was placed. Respiratory failure and sepsis were treated in the ICU and ventilator weaning was begun only to rebound with recurrent episodes of septic shock. This was repeated four times over a two-month period. Renal function progressively declined, as did her baseline mental status. This is the last EGK on file for this patient:

She experienced asystolic arrest and died the next day.

In their 1999 publication, Claeys et al. utilized persistent ST-segment elevation following PCI to identify patients at risk for reperfusion injury. They report, “Patients >55 years of age with systolic pressures <120mmHg were at high risk for development of impaired reperfusion compared with patients not meeting these criteria (72% versus 14%, P<0.001).” (Claeys et al., 1999, p.1972)

Also in 1999, Matetzky et al. demonstrated similar findings comparing clinical outcomes in patients with comparable angiographic results following PCI but contrasting presentations on ECG regarding the persistence of ST-segment elevation. Results of this research indicated that, “…ST segment elevation resolution was associated with better predischarge left ventricular ejection fraction…. Group B patients [those with persistent STE], as compared with those of Group A [those with early resolution of STE], had a higher incidence of in-hospital mortality (11% vs. 2%, p 0.088), congestive heart failure (CHF) (28% vs. 19%, odds ratio (OR) 4, 95% conﬁdence interval (CI) 1 to 15, p 0.04), higher long-term mortality (OR 7.3, 95% CI 1.9 to 28, p 0.004 with Cox proportional hazard regression analysis) and long-term CHF rate (OR 6.5, 95% CI 1.3 to 33, p 0.016 with logistic regression).” (Matetzky et al., 1999, p.1932)

In 2007, Galiuto et al. investigated the clinical correlates found in patients demonstrating persistent STE following primary or rescue PCI. They report, “Such an ECG sign at hospital discharge may be considered associated with a large infarct size, and, in 30% of cases, with LV aneurysm formation and with continuing LV remodeling.” (Galiuto et al., 2007, p.1380)

These three studies reviewed between 100-150 patients each.

In 2010, however, Verouden et al. reviewed over 2100 patients undergoing PCI with the intent of further characterizing the clinical and demographic determinants of persistent ST-elevation after coronary intervention. They report that, “Incomplete ST-segment recovery was a strong predictor of long-term mortality…,” and, “…incomplete ST-segment recovery at the end of PCI occurred signiﬁcantly more often in the presence of an age >60 years, nonsmoking, diabetes mellitus, left anterior descending coronary artery–related STEMI, multivessel disease, and preprocedural Thrombolysis In Myocardial Infarction grade 3 ﬂow.” (Verouden et al., 2010, p.1692)

Matetzky, S., et al. (1999). The significance of persistent ST elevation versus early resolution of ST segment elevation after primary PTCA. Journal of the American College of Cardiology. Vol. 34, No. 7, 1999.