The past is not dead, it is not even past.

In April of 2011 I presented a case of subtle hyperkalemia. A reader, Dr. George Nikolic, author of Practical Cardiology 2nd Ed., responded with the following commentary,

“The QT is unusually long for hyperkalemia; the lady may have additional pathology (e.g., myxoedema) or be on some QT prolonging medication. The commonest cause of low voltage is large or multiple infarcts in the past. What were her other medical problems?”

I was unable to follow up on this case until recently. Here is what I uncovered:

The patient was an 81 year-old caucasian female nursing home resident of unknown social background with a past history of hypertension, dyslipidemia, diabetes, colon cancer (s/p diverting ileostomy), depression and dementia. Despite numerous cardiac risk factors, she had no explicit history of myocardial infarction, coronary disease, or CHF. There was no history of thyroid disease or obesity.

She had visited the Emergency Department 12 days prior to this episode with complains of weakness and bradycardia. At that time her BUN was 22, Creatinine 0.8, Sodium 136, Potassium 3.7, and Calcium 9.1. The following EKG was recorded:

Cardiology was consulted and a differential of sick-sinus syndrome vs. beta-blocker toxicity was considered. The Lopressor was reduced, and, following a 48-hour admission, she was discharged back to the nursing home with a slightly increased heart rate.

Two weeks later, on the date in question, she again presented to the ED with complaints of syncope and generalized weakness. This EKG was recorded on arrival:

The hospitalist’s admission note described a provisional diagnosis of acute renal failure secondary to dehydration and possible UTI. Obstructive failure was also considered in light of the cancer history. Most revealing, a thorough chart review revealed two prior admissions for acute renal failure secondary to dehydration from high-output ileostomy syndrome.

Echocardiography on the second hospital day reported no chamber enlargement, no increased wall thickness, no wall motion abnormalities, no valvular disease, no pericardial or pleural effusion, and a normal systolic function with an EF > 55%.

On the third hospital day she was discharged back to her nursing facility with the following EKG:

The differential diagnosis for low voltage is broad; neoplastic, metabolic, autoimmune, infectious, genetic, and acquired disease states are all represented.

When bradycardia is added, the field narrows: thyroid disease, acute or chronic ischemia, and hypothermia are among the most common etiologies.

In hyperkalemia, it is traditionally understood that when the QRS is normal, the QTc should be either shortened or unremarkable. (Smith, Jan 12, 2010; Lipman-Massie, p.579) In this case, the QTc at 6.4mEq K+ (394) is practically identical to the QTc at 4.0 mEq K+ (394). I do not know if the GE-Marquette algorithm uses the Bazett formula for QTc, but this formula is known to under-correct at abnormally low heart rates. (Wikipedia, 2012) Therefore, although the QTc here may be longer than the computer estimates, in an adult female, a QTc of 395 remains if anything on the short side of normal. Regarding medications, however, Lexapro is known to cause QT prolongation.

There was no effusion, as I had originally hypothesized in 2011. We do not have a solid culprit for the low voltage. The QT looks relatively normal. I am grateful for Dr. Nikolic’s attention and comments regarding this case. Fortunately for the patient, the clinical correlations do not seem to support either of our theories.

In 2007, Littmann and colleagues presented a novel EKG indicator of hyperkalemia based on the computerized “double counting” of heart rate. Over a 13-year period they identified 33 cases in which the GE-Marquette computerized 12SL EKG interpretation algorithm “double counted” or “near double counted” the actual heart rate seen on electrocardiogram. All 33 patients had hyperkalemia (between 5.3-8.8 mEq/L K+) as confirmed by serology taken within two hours of the double-counted EKG recording.

Littmann’s sign can be seen in the following EKG, initially presented here as a study in hyperkalemia in September of 2010. 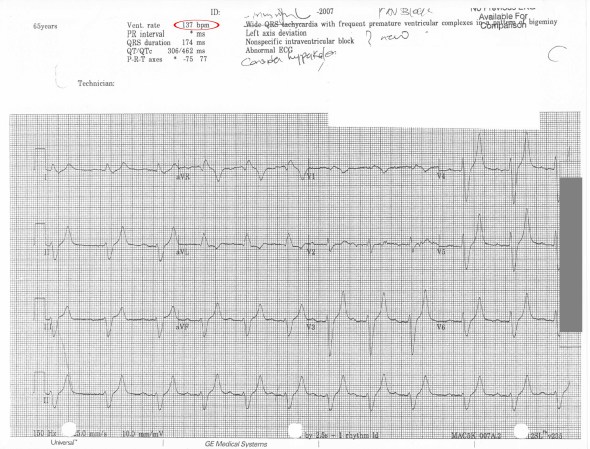 A 65 year-old Caucasian man with sepsis and HHNKC; the potassium was 7.7mEq/L. The heart rate is 72 bpm; the computer counts 137 bpm.

Although the GE algorithm is proprietary and unavailable for analysis, they argue that, “The QRS width and axis measurement by the interpretation software suggested that, on many occasions, the computer recognized the T waves as being the QRS complexes….” (p.586)

While this research represents an intriguing new insight, it leaves many open questions. How were these 33 EKG cases identified? Were certain populations screened for this anomaly? How many total EKGs were reviewed in the course of this investigation?

Littmann claims that double counting “appears to be quite specific” presumably because all 33 EKGs were associated with underlying hyperkalemia. Yet without insight into the methods used to assemble this case series, I remain skeptical that these investigators did not succumb to confirmation bias in the process of collecting their EKGs. The existence of non-hyperkalemic double counting is not discussed in this publication and no differential diagnosis is presented regarding alternative etiologies.

In fact, concerning alternative etiologies and the specificity of double QRS counting, it turns out that this phenomenon has been extensively described in the pacemaker literature for over a decade. A Pubmed search using the combined terms “double counting QRS” produces numerous references. (Al-Ahmad A, Barold SS, Boriani G)

I reviewed 22 pacemaker EKGs collected over a 10 month period, recorded pre-hospitaly using the same GE-Marquette algorithm. This is what I found:

Looking further through ~50 EKGs collected over the same 10 months I found this as well:

In the first pair of EKGs, the computer appears to be confusing the pacemaker spike for a QRS complex; this is clearly “double counting of the QRS.”

The second pair is more complicated. This is not technically “double counting” of the QRS; there is not a 1:1 relationship between each QRS and a particular artifactual deflection. This is over-counting with a coincidental but not precise 2:1 relationship between the total count made by the computer and the total number of true QRS complexes. The interpretation of “Atrial Fibrillation” supports this in that it suggests that numerous complexes are counted during the first 5 seconds and then much fewer in the last 5. Although Littmann’s sign is not technically present here, the 12-lead EKG must be scrutinized to reach this conclusion. This seems problematic given Littmann’s stated goal of elucidating an “objective”, and “easily identifiable” indicator. (p.586)

No clinical data is available on these EKGs and it cannot be proven that these patients did not in fact have elevated potassium.

While producing these two hypothetical “false positives” hardly constitutes significant evidence, it is interesting that such counterpoints to Littmann’s specificity claims were so easily identified. Of further concern is the distinction between perfect double counting as seen in the pacemaker case and “near double counting” as seen in both the hyperkalemia case from Sept. 2010 and artifact case. What bearing this has on Littmann’s argument remains unclear.

Although a novel indicator, I am not sure that there is as yet persuasive evidence for what exactly Littmann’s sign indicates or how often this indication is specific for any one underlying clinical etiology.